LOS ANGELES, Aug. 22, 2022 – Viking® (www.viking.com) today named its newest river ship, the Viking Osiris, with a celebration in Luxor, Egypt. As part of the intimate event, the company’s first ceremonial godfather, George Herbert, the 8th Earl of Carnarvon, offered a blessing of good fortune and safe sailing for the ship—an evolution of the naval tradition that dates back thousands of years. Designed specifically to navigate the Nile, the state-of-the-art ship was built at Massara shipyard in Cairo and will sail Viking’s bestselling Pharaohs & Pyramids itinerary. 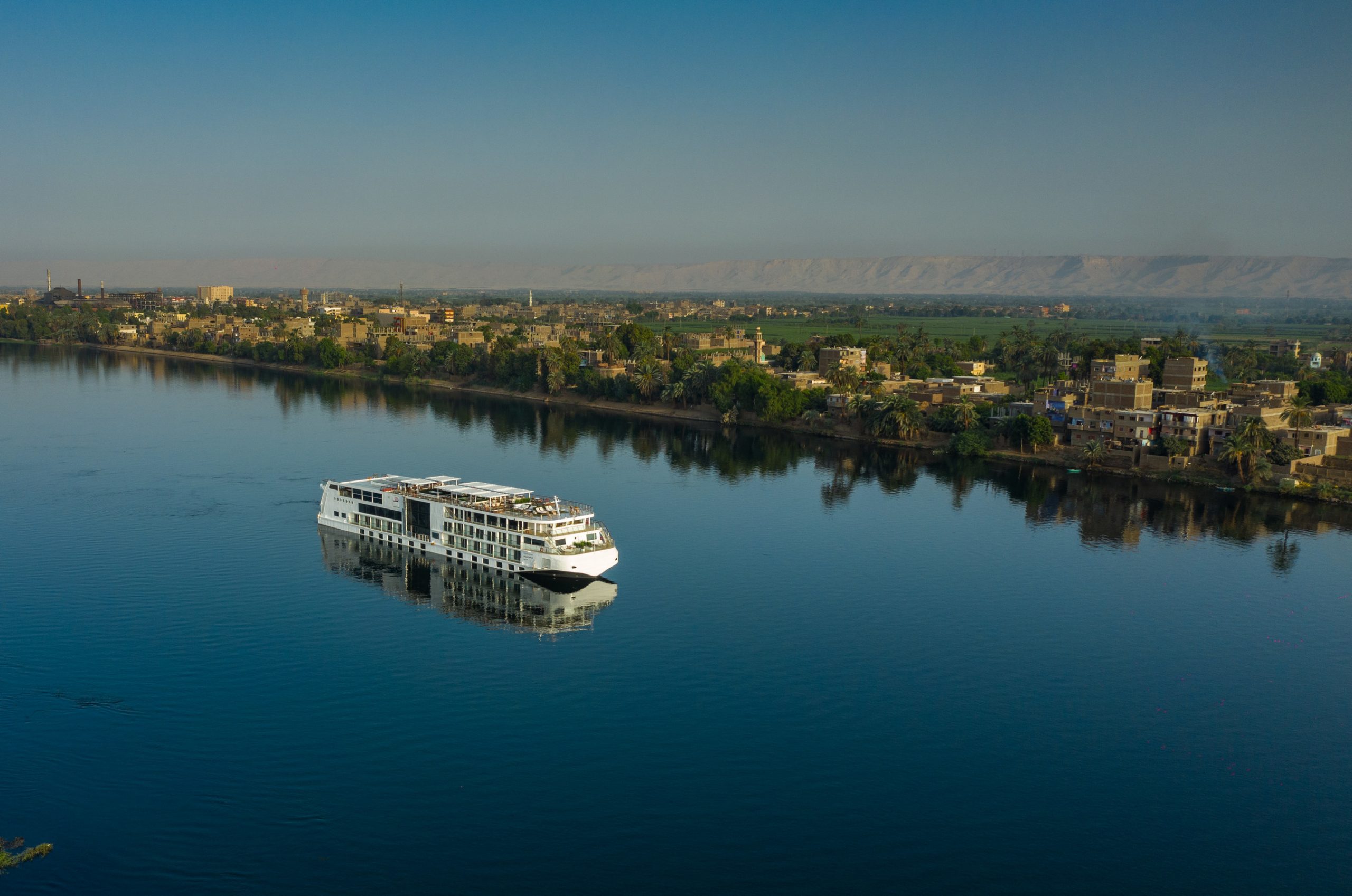 Viking today named its newest river ship, the Viking Osiris, with a celebration in Luxor, Egypt. Designed specifically to navigate the Nile, the state-of-the-art ship was built at Massara shipyard in Cairo and will sail Viking’s bestselling Pharaohs & Pyramids itinerary. For more information, visit www.viking.com.

The naming of the Viking Osiris comes as Egypt marks several key events this year, including the highly anticipated opening of the new Grand Egyptian Museum outside of Cairo on the Giza Plateau and the 100th anniversary of the discovery of King Tutankhamun’s tomb by the world’s most famous Egyptologist, Howard Carter, and his benefactor and co-explorer, the 5th Earl of Carnarvon.

“Egypt has always drawn curious explorers for its rich history and ancient antiquities, and ever since we first began operating on the Nile River in 2004, our guests continue to be amazed by the country’s many cultural treasures. Today we are pleased to officially welcome the Viking Osiris to our growing fleet on the Nile River, which allows us to welcome even more curious explorers to this incredible destination,” said Torstein Hagen, Chairman of Viking. “During this milestone year for Egypt, we are also very grateful for the continued close friendship with the Carnarvon family, and that Lord Carnarvon has honored us by serving as the first godfather in our history.”

“It is a great honor to be asked to be godfather to the Viking Osiris, one of the most beautiful river vessels to have ever graced the Nile. This is especially the case in the centenary year of my great-grandfather’s discovery of the tomb of the Pharaoh Tutankhamun, and no doubt he and my great-grandmother, Lady Almina, would have been delighted to board the Viking Osiris had it been sailing in their day,” said Lord Carnarvon. “The 5th Earl of Carnarvon was one of the great explorers and excavators of his time, and today you may join in his love of the glories of ancient Egypt, all in the exceptional comfort and style of the Viking Osiris.”

The 5th Earl of Carnarvon and the Discovery of King Tut’s Tomb
Nearly 100 years ago, in November 1922, the discovery of the tomb of Tutankhamun by the 5th Earl of Carnarvon and Howard Carter was considered the first global media event and has provided a legacy of understanding, knowledge and insight into a remarkable civilization. In her newest book, The Earl and the Pharaoh: From the Real Downton Abbey to the Discovery of Tutankhamun, the Countess of Carnarvon tells the behind-the-scenes story of this discovery and explores the unparalleled life of the 5th Earl. Among many talents, he was an avid amateur photographer with an artistic eye for composition. His photographs are at Highclere Castle currently, stored in photo albums in the Library, and show the process of discovering and excavating the tomb of Tutankhamun, as well as scenes of daily life in Egypt of the period. With kind permission, the Carnarvons have allowed Viking to share this private collection for guests sailing on board the Viking Osiris.

Viking and Highclere Castle
For years Viking has offered a variety of ways for its guests to experience life at Highclere Castle, which is the home of the Earl and Countess of Carnarvon and the historic estate best known as the filming location of Downton Abbey. Viking became a household name during its sponsorship of the celebrated MASTERPIECE series through the years Downton Abbey aired on PBS. Karine Hagen, Viking Executive Vice President, worked closely with the Carnarvon family to develop the Privileged Access Pre/Post Extensions that feature the estate, including the highly-rated Oxford & Highclere Castle and Great Homes, Gardens & Gin extensions. Both are available for guests on select river and ocean voyages. For guests sailing the Pharaohs & Pyramids Nile River itinerary, Viking offers a five-day British Collections of Ancient Egypt Pre Extension, which gives guests an introduction to Egyptian antiquities in preparation for their Nile experience, including retracing the steps of Howard Carter and the 5th Earl of Carnarvon. Guests experience Privileged Access to archives and museum exhibits not normally accessible to the public, including a private, early morning tour of the Egyptian Collection at the British Museum, as well as visits to Sir John Soane’s Museum, the Petrie Museum, the Ashmolean Museum and Oxford University’s Griffith Institute, which houses Carter’s archives. At Highclere Castle, guests also have the opportunity to view the Earl’s magnificent private collection of Egyptian artifacts.

The Carnarvon family has also welcomed viewers to Highclere Castle on Viking’s award-winning enrichment channel, Viking.TV (www.viking.tv). In the ongoing series, At Home at Highclere, Lady Carnarvon offers virtual Privileged Access to the historic home and its grounds during which she is joined by Lord Carnarvon, who shares his memories and a look inside his ancestral home.

The Viking Osiris & Viking’s Growing Egypt Fleet
Hosting 82 guests in 41 staterooms, the new, state-of-the-art Viking Osiris is inspired by Viking’s award-winning river and ocean ships with the elegant Scandinavian design for which Viking is known. The vessel features several aspects familiar to Viking guests, such as a distinctive square bow and an indoor/outdoor Aquavit Terrace. The Viking Osiris joins the Viking Ra, which launched in 2018. Additionally, in response to strong demand, the Viking Aton, an identical sister ship to the Viking Osiris, will join the fleet in 2023. During today’s naming event in Luxor, Hagen also announced that two more sister ships, the Viking Hathor and the Viking Sobek, are already under construction and will be delivered in 2024 and 2025, respectively.

Viking’s Pharaohs & Pyramids Itinerary
During the 12-day, Pharaohs & Pyramids itinerary, guests begin with a three-night stay at a first-class hotel in Cairo, where they can visit iconic sites such as the Great Pyramids of Giza, the necropolis of Sakkara, and the Mosque of Muhammad Ali. Beginning in late 2022, guests will also be able to visit the new Grand Egyptian Museum. Guests then fly to Luxor, where they visit the Temples of Luxor and Karnak before boarding a Viking river ship for an eight-day, round-trip voyage on the Nile River, featuring Privileged Access to the tomb of Nefertari in the Valley of the Queens and the tomb of Tutankhamun in the Valley of the Kings, and excursions to the Temple of Khnum in Esna, the Dendera Temple complex in Qena, the temples at Abu Simbel and the High Dam in Aswan. Guests also visit a colorful Nubian village, where guests can experience a traditional elementary school. Finally, the journey concludes with a flight back to Cairo for a final night in the ancient city.

About Viking
Viking was founded in 1997 and provides destination-focused journeys on rivers, oceans, and lakes around the world. Designed for experienced travelers with interests in science, history, culture and cuisine, Chairman Torstein Hagen often says Viking offers guests The Thinking Person’s Cruise® in contrast to mainstream cruises. Viking has more than 250 awards to its name, including being the first cruise line to ever be named both the #1 ocean cruise line and #1 river cruise line in Travel + Leisure’s 2022 “World’s Best” Awards in a single year. In addition to consistently ranking at the top of Travel + Leisure’s “World’s Best” awards, Viking has been rated the #1 River Cruise Line and #1 Ocean Cruise Line by Condé Nast Traveler in the publication’s 2021 Readers’ Choice Awards. For additional information, contact Viking at 1-800-2-VIKING (1-800-284-5464) or visit www.viking.com. For Viking’s award-winning enrichment channel, visit www.viking.tv.

Start of the cherry blossom season in Japan
Viking Welcomes Guests On Board In Malta
Ancient calendar and a map of the cosmos revealed at the Yazılıkaya Rock Temple in Turkey
Indonesia and Singapore are starting quarantine-free travel between the two countries
The Best Greek Islands for a Quiet Vacation
Travel is a mess all over the world
Summer is Here: The Raft of the Medusa
If you’re traveling abroad and don’t speak the local language
Viking Welcomes Guests Back on Board for River Voyages in France
The Dyrt Helps Campers Beat the Heat

Why Sri Lanka is the perfect place for your post-pandemic travel therapy
‘Buy Now, Pay Later’ Can Support the Travel Industry Recovery According to Zip Co
There is no straight line between curbing travel and curbing infections
Tour of Ancient Rome
Travel slowly returns
What to expect from the 2022 summer travel season
‘We Are Back!’ Royal Caribbean Group Resumes U.S. Cruising Today
Good Old Vienna
Château Quintus Grows with the Acquisition of Château Grand-Pontet
Should You Really Use a Travel Agent? – WSJ
The Loire is loved for its wines
MSC Lirica on Mediterranean cruise
Saint-Émilion, France
Travel guide to Bilbao, Spain
How to avoid looking like a tourist in France?
At the start of the year Rzeszow was the 15th-biggest city in Poland
Famous Key Marco Cat on exhibit at Marco Island Historical Museum through 2026
Harbour House, Bristol
UK’s best ancient sites
Five Top Tips for Safe Travel This Summer From International SOS
We use cookies on our website to give you the most relevant experience by remembering your preferences and repeat visits. By clicking “Accept”, you consent to the use of ALL the cookies.
Do not sell my personal information.
Cookie SettingsAccept
Manage consent